Hi! I’m Renee Teate, one of the Data Scientists at HelioCampus. In order to practice thinking through the types of decisions that I often need to make when presenting data visually, I thought I’d give Tableau’s “Makeover Monday” challenge a try, and share my choices with you here on the HelioCampus blog! I searched through the available datasets, and found one that is relevant to higher ed, called “Average Tuition in the United States” (see May 2016).

This is the original data visualization example presented to be made over: 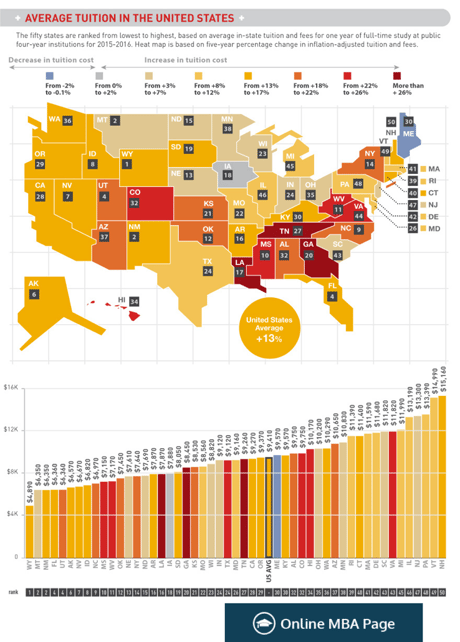 This “before makeover” version includes a “heatmap” of the United States using color to indicate each state’s change in public four-year institution tuition over five years, and a bar chart sorted by average tuition cost per state and colorized to match the map.

It does effectively highlight the states with the largest changes in tuition cost, as well as the highest and lowest tuition amounts. However, the sheer amount of information in these visuals is a little too overwhelming to process quickly for comparison.

Before you design any visualization, you should first define what question you’re trying to answer, or what story you want to tell. In this case, I wanted to illustrate the increase in tuition costs by state by year alongside “benchmark” reference values so the user could compare one state’s trend to overall trends and those of other states. I also wanted a quick summary of “before and after” tuition costs, which compared the cost by state at the earliest and latest dates in the chart.

So, the questions I am asking are:

Because I’m not asking any questions that have to do with geography, I don’t have a real need for a map, so I decided not to use Tableau’s (admittedly beautiful) mapping functionality.

One example of a great makeover, designed by Andy Kriebel on his VizWiz blog, gets close to what I had in mind, and answers these same questions: (Interactive version on Tableau Public)

These charts have the U.S. Average trendline in black and the selected state’s trendline in red, with light gray lines for the rest of the states acting as a “background” to show the overall range of values. I liked how Andy’s design minimized overwhelm while highlighting key trends as well as values relative to a baseline.

I wanted my interactive dashboard to operate similarly, but thought I’d create a version that didn’t include all 50+ grey lines, and add bar charts to easily visualize the earliest (2004) and latest (2015) available data points per state to illustrate the overall change, in addition to the year by year trends shown by the lines.

Here’s what I came up with: 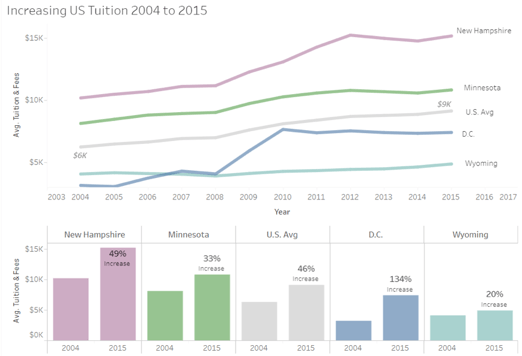 The light gray line and bars in my dashboard indicate U.S. Average values. I also labeled the lowest and highest values at each end of the line for easy reference without having to look across to the y-axis. You can see in the bar chart that the overall increase in U.S. average tuition was 46%, and you can see how that compares to some reference states.

I selected four states to display as reference values. I chose these particular states because New Hampshire has the highest cost in recent years, Wyoming has the lowest cost in recent years, D.C. had an interesting sharp increase between 2008 and 2010 and a very large percent increase overall, and Minnesota had a trend very similar to the U.S. Average, though at a higher amount, filling the gap between the U.S. Average and NH. I thought these states showed a good set of examples of the variety of values in the data.

If I overlay the lines that aren’t visible in the default display, you can see that the ones I decided not to show by default largely lie in between the ones I selected:

The way this interactive is designed to work, the state trendlines won’t all be displayed at one time. The idea is that the user would select a single state to add to the default selections for comparison. Any added state appears in a bright orange color, highlighting the selected state to facilitate visual comparison.

For example, when my home state of Virginia is selected, its line and bar charts are added to the dashboard like so: 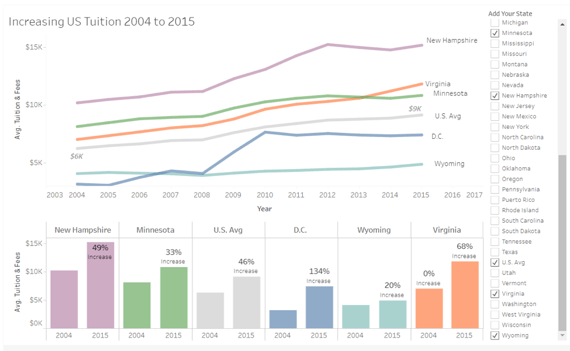 The user can quickly see in the line chart that Virginia’s average tuition is above the U.S. Average for the entire time period, and it has increased at a sharper rate than most of the reference lines between 2013 and 2015, crossing to be above Minnesota’s average tuition for the first time in 2014. The bottom bar chart shows the “first year vs last year” comparison, and the label indicates that Virginia’s tuition increased by 68% overall between 2004 and 2015.

I chose to add the state-name labels to the lines and each pair of bars and exclude a color legend for ease of reference and reading, as well as to make the chart more accessible to colorblind viewers. The hover-text, which you can see in the interactive version, indicates the average tuition dollar amount and percent change since 2004 on each trendline data point.

If you want to give the Makeover Monday challenge a try yourself, you can find the Tableau data extract and more information at the links in the first paragraph above. I would love to hear about your ideas for improving this dashboard and see your makeovers, so please share in the comments below!

Make sure to click through to the interactive version of my dashboard on Tableau Public!

Are you attending the Tableau Conference in Las Vegas this week? I will be there and am organizing an informal meet & greet today at 5:15pm in Data Village at the Education Networking Area of the Welcome reception (marked 6 on Welcome Reception map in Data17 app) for people interested in higher ed, data science, or learning more about HelioCampus. Email me at renee.teate@heliocampus.com or tweet at @becomingdatasci if you’re interested, and I'll update you with the location!
Tag(s): Higher Education , Data Visualization

A Q&A with Renee Teate: HelioCampus Data Scientist and Author